This life given to us by Nature is short. But the memory of a life well spent is eternal…

The elders of a house, like the wise banyan, always stand strong supporting those who bloom in their sheltering shade. Their efforts and vision reflect not only in the walls of the building they erected, brick by brick, but even in the spirit of oneness the family lives by. The stability they create from the ground up, the strength they infuse with each passing day and the love with which they glue all the pieces together, make the legacy that future generations enjoy in the years to come.

Delhi Public School Noida breathed its first under our Founder Principal, dear Dhawan Sir in the year 1982. “He knew every stone of the pathways and every brick in the wall”, simply sums up his deep involvement in the institution that he built with love and passion. Constantly out of his office, treading the entire school, Dhawan Sir was always alert and involved in every facet of school functioning. Known to be man of few words, with incisive eyes that spoke volumes, Mr. B. L. Dhawan was a teacher at heart and his initiative and vision was perfectly complemented by his warmth and compassion.

Dhawan Sir was a nature lover, which is quite evident in the beautiful school he created with its front lawns, Gandhi Statue, open-air stage with a terrace that offered a panoramic view of the school activities below, horse-riding stables, sprawling hostel area including a workshop where students hand-printed their own newsletters, books etc. Unsurprisingly, DPS NOIDA, under his tenure, was awarded ‘Asia’s most Beautiful Institutional Building Award’ by “Modern Architecture in India-Post Independence Perspective”, one of the best publications on Indian Architecture in the post-independence era. In the book, DPS Noida is described under the caption “Simple is Beautiful”.

He was also the first Principal to organise an International Education Convention and undertake several other initiatives that gave recognition to our fledgling institution. In 1983, when the school was barely one year old, the students staged a grand saga about India’s freedom movement “Meri Pyaari Janambhoomi” (a dance drama presentation of the country’s history of the last 300 years, written by Shri S.L. Dhawan himself) to packed audiences at Kamani Auditorium and AIFACS, which was widely appreciated by all and witnessed by the then Prime Minister of India, Shri Rajiv Gandhi himself. It was telecast on Doordarshan!

In 1991, SH. S. L. Dhawan rightfully received the Padma Shri, a fitting recognition of his stellar role in the educational world. Sir was a Life Member DPS Society, Principal DPS Mathura Road, Founder Principal DPS Noida and DPS Ranipur. He often referred to DPS Noida as a ‘Mubarak Zameen’, it having given birth to DPS Greater Noida and DPS Bulandshahar.

Today, all that DPS Noida is and aspire to be is, in great measure, an offshoot of the dream that he had dreamt .It can be quite confidently said that Sir’s words, deeds and lessons will forever stay alive in our memories and imagination. 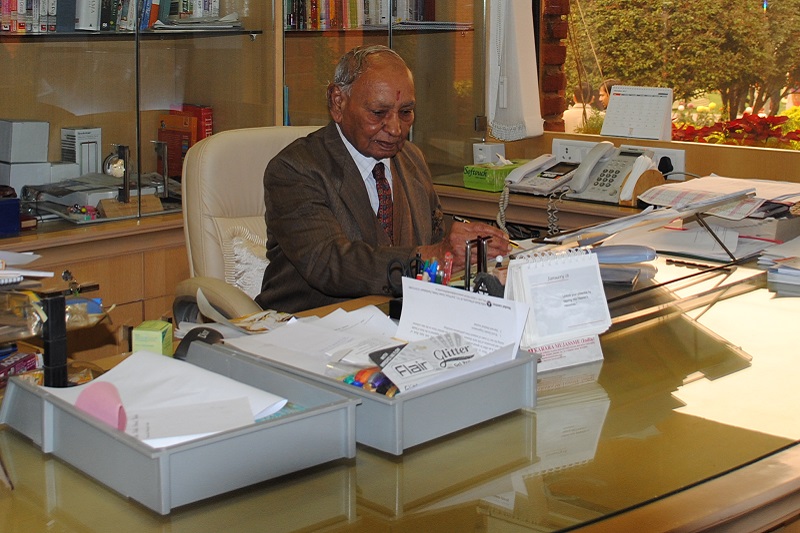